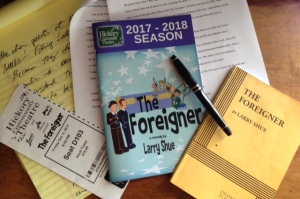 When the thought of making small talk with the other guests at a fishing lodge overwhelms Charlie Baker, his friend Froggy LeSueur concocts a story to enable the shy, fretful Charlie to avoid conversation—and to do so without seeming rude. Froggy tells Betty Meeks, the owner of the lodge, that Charlie is a foreigner who doesn’t speak English. And to stave off questions about Charlie’s homeland, Froggy implies that he can’t disclose that information because Charlie is on a classified mission.

And so the farce of the not-so-foreign foreigner begins. While Charlie—a proofreader for a science fiction magazine—is in fact a true foreigner on American soil, no one in Tilghman County, Georgia would think of him as foreign if he spoke in his native tongue, as Froggy, his friend and fellow Englishman, does. The ruse of the language barrier becomes a boon not only to Charlie but also to Betty and her guests. As Charlie observes to Froggy:  “Because of me, you see? We—all of us, we’re becoming—we’re making one another complete, and alive, and—oh, I can’t explain” (2.1). As Froggy watches the guests grow more fascinated by his friend and his made-up, pseudo-Baltic language (gok, blit, etc.), Froggy remarks to Betty that he’s feeling “a bit dull,” to which Betty replies: “No, now Frog. You cain’t help it if you ain’t a foreigner.” But of course Froggy is a foreigner, as the audience knows, and Charlie is, too—but not in the sense that the other characters believe he is, and that dramatic irony becomes the play’s driving force.

Ultimately, The Foreigner is not about foreignness but rather about misunderstandings and misperceptions—in particular the ones that engender racism and xenophobia. Charlie and the friends he makes at Betty’s lodge prevail over the villains who have been in their midst throughout the play, one of whom has appeared to be their ally. That villain is fundamentally more frightening than the one whose hatefulness and penchant for violence has been clear from the start.

Seeing those villains on stage now, reminds theatregoers that Larry Shue’s comedy is not the period piece that it may appear to be. When one of the characters reads aloud a magazine story to show how out-of-date it is, she is reading the story of the naming of the infant Prince William, which was only a year in the past when Shue wrote The Foreigner. (William was born in 1982; Shue’s play premiered in 1983.) But though William now has two children of his own—and another on the way—the play’s villains are not old news. They are still here; we saw them descend on Charlottesville.

We will never know what Larry Shue might have written about our latter-day Owen Mussers and Reverend David Lees, the villains we recognize and the ones we don’t.

Only two years after he wrote The Foreigner, Shue died in a commuter plane crash. Since his death, The Foreigner has become a staple of community and professional theatres alike. Shue’s play has endured because of the appeal of its title character. But what’s vital for audiences watching it now and realizing its prescience is the potential power of its satire.

The Hickory Community Theatre’s production of The Foreigner returns for its third and final week tonight.