In Norman Rockwell’s painting Girl at the Mirror, the face that viewers see is the girl’s reflection—not her face itself, but the one she sees in the glass. What does she see in herself, and what do the paintings’ observers see, as we witness this private moment? Does her lace-trimmed petticoat evoke in her, or in us, thoughts of the wedding gown that she may wear one day? For Rockwell’s detractors—and for those who consider him a guilty pleasure—Girl at the Mirror and his other covers for The Saturday Evening Post present a sentimentalized depiction of American life, the same picket-fenced cliché that many who find fault with Our Town perceive as the prevailing image of the play. As theatre scholar Donald Margulies writes in his foreword to Our Town, many people who dislike it have “dismissed [it] as a corny relic of Americana and relegated Thornton Wilder to the kitsch bin along with Norman Rockwell and Frank Capra” (xi). Yet a close look at Our Town and Girl at the Mirror reveals portraits of American life that are far from idyllic.

As she gazes pensively in the mirror, the girl in Rockwell’s painting might be asking herself the same question that Emily Webb asks her mother: “[A]m I pretty?” (31). Though Mrs. Webb tries to reassure her daughter, Emily seeks an answer that her mother’s words fail to provide.

Both Emily and the Girl at the Mirror occupy that awkward space between childhood and adulthood—a notion that Rockwell emphasizes with the composition of his painting, placing the girl between her childhood toy, the doll that she has cast aside, and her new grown-up object of interest, movie star Jane Russell, who gazes up at her from the page of a magazine. Will I ever be beautiful and desirable, the way you are? the girl might be asking of Russell. Or, as Emily asks her mother: “Am I pretty enough . . . to get anybody . . . to get people interested in me? (32). Though Mrs. Webb answers Emily, she does not provide the answer that her daughter seeks. Telling Emily, instead, that she has “a nice pretty young face” (31) and that she’s “pretty enough for all purposes” (32), she avoids the subject of adult desire that underlies Emily’s questions.

Though the audience feels the frustration in Emily’s voice as she says, “Oh, Mama, you’re no help at all” (32), only later in the play do we feel the full weight of those words when Mrs. Webb confesses in the wedding scene that she has never talked to Emily about sex: “It’s cruel, I know, but I couldn’t bring myself to say anything” (76). Mrs. Webb’s monologue turns the scene of her daughter’s wedding into a reminder of the vulnerability and pain that come as a consequence of a lack of sexual knowledge. That same darkness at the edge of a seemingly quaint picture appears in Girl at the Mirror. Consider the doll, just beyond the mirror and the viewer’s focus, innocently cast aside perhaps, but backed up to the edge of the mirror’s frame. To the adult eye, the doll’s posture is clearly one of sexual submissiveness. 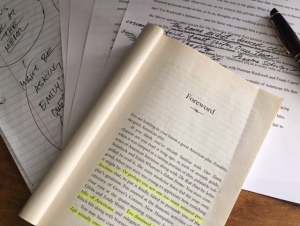 Both Wilder’s and Rockwell’s visions are more complex than what their critics give them credit for—or more accurately deny them—rendering the trouble that lurks below the surfaces of our daily encounters. And while the sexual innocence of Emily Webb and Rockwell’s Girl at the Mirror may seem distant to us, the silence that endangers their innocence pervades our lives. Now as revelations of celebrities’ and politicians’ transgressions saturate our news streams, the silences of Wilder’s characters seem eerily prescient. Can anyone now hear Mrs. Webb say, “I couldn’t bring myself to say anything” (76), without thinking of our own culture of silence—and of  Roy Moore and Louis C.K. and Kevin Spacey and Harvey Weinstein—and of all the predators in our own towns, places supposedly so far removed Grover’s Corners?

Meanwhile, back in Our Town, Mrs. Gibbs says of Simon Stimson’s alcoholism that “the only thing the rest of us can do is just not to notice it” (40). And Constable Warren says, “‘Twant much” (104), of a Polish immigrant nearly freezing to death, another way of saying that some lives do not matter as much as others, a prejudice that we know all too well as no mere relic of the past.  Those moments in Our Town not only belie the notion of Grover’s Corners as a saccharine portrait of America but also demonstrate that the play critiques the very parochialism that its detractors denounce as its stock-in-trade.

In his reassessment of Rockwell’s paintings, Richard Halpern observes that “[a] false belief in our own sophistication or knowingness is just another form of innocence” (par. 17). The same innocence may prevent us from seeing Our Town with real clarity, the way that Emily only truly sees her twelfth birthday when she revisits it after death. As she says to the Stage Manager, “I can’t look at everything hard enough” (105). Perhaps in our own innocence, neither can we.

3 thoughts on “Through a Glass Darkly: “Girl at the Mirror” and Grover’s Corners”