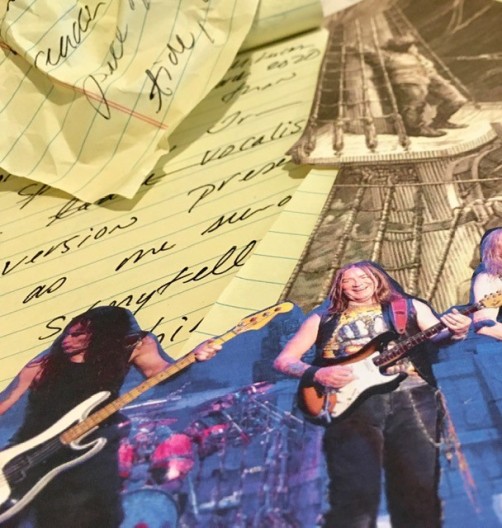 A sailor kills a bird of good omen, his destructive act dooms his shipmates and curses him with retelling the tale over and over: So the story of the Ancient Mariner goes. Yet those plot details convey neither the epic nature of Samuel Taylor Coleridge’s poem nor its influence on later writers. Only the poem itself places readers fully in the imaginative realm of the tale, but its late eighteenth-century diction creates a gulf between the poem and contemporary readers. Consequently, one of the challenges of introducing “The Rime of the Ancient Mariner” to millennial students is bridging that gulf. Iron Maiden’s adaptation offers one solution. By eliminating the shifts in the narrative voice and updating the story with contemporary language, their heavy-metal version draws listeners into the story with emphatic rhythms that capture the spirit of the original lines.

Archaic words, such as “stoppeth” (line 2), have a way of stopping readers in their tracks, calling attention to their temporal distance from the poem. Along with the distancing effect of the language, the shifts from one speaker to another can pose problems for twenty-first century readers. Although the Mariner tells his own story, the first words that he speaks are in the fifth stanza. The four stanzas that precede his first words are voiced alternately by an unnamed narrator and the wedding guest who becomes the Mariner’s captive audience. In prose such shifts are easily navigated with paragraphing and dialogue tags. Most poems, however, lack such signals, and their absence in Coleridge’s poem compounds its difficulty. Not only are some of the words obstacles, it’s not always clear who is speaking them. 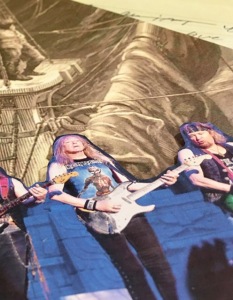 Iron Maiden’s adaptation eliminates those issues with updated diction and a consistent narrative voice. Rather than shifting speakers, Iron Maiden’s version presents the tale sung by a single storyteller, not the sailor himself, but a narrator who tells listeners to “[h]ear the rime of the ancient mariner” (1). Those first words of the song, penned by lead singer Bruce Dickinson, form an imperative sentence: a command with the understood subject “you”—“[You] hear the rime . . . ” (1). I am master and commander of this story, Dickinson seems to say, and you will hear it now. Such is the power of the imperative. Rather than leaving the reader questioning, as Coleridge’s first stanzas may, Iron Maiden’s song speaks directly to listeners, taking hold of them with the pull of a powerful tide, drawing them out to sea to witness the Mariner as he kills the albatross and seals his fate.

The nature of that fate, that the Mariner must tell his tale over and over, is effectively emphasized by the song’s repetition. The recurrence of the words “on and on,” which first appear to underscore the length of the voyage (17, 18) are repeated in the last line: “And the tale goes on and on and on” (89). That ending may be more fitting than the original. The “sadder and wiser” (624) listener at the end of Coleridge’s poem also appears in the last verse of the song. But by returning to the retelling of the story, the song’s ending shifts the focus from the wedding guest who hears the story only once to the teller who must tell it over and over.

Making the Mariner’s story more accessible through song is valuable not only as an introduction to the poem but also as a starting point for understanding its influence on later English writers, including Mary Shelley, the second-generation Romantic who featured both images and lines from the poem in her novel Frankenstein. Coleridge’s poem was one of Shelley’s favorites, one that she first encountered as a child when the poet recited it in her father’s study (Karbeiner xiii). Iron Maiden’s version captures the spirit of what Mary Shelley, Coleridge’s fan girl, heard: the epic ballad of an eighteenth-century rock star.