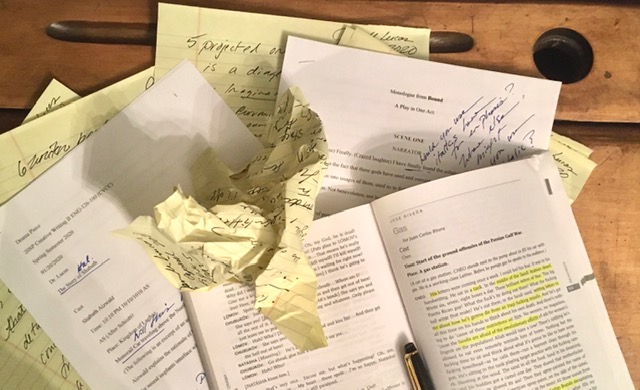 Welcome to our third drama workshop session, and thank you for your thoughtful feedback on The Slow Decline and the monologue from Bound. Before we turn to the untitled monologue and The Story of Shabath, I offer these follow-up notes:

Rather than making additional reading recommendations tailored for the writers of The Slow Decline and the monologue from Bound, I am offering one that’s relevant to all of us now: the recent New York Times article “Has Your Dystopian Play Come in Handy?,” which features snippets of conversations with playwrights who have authored plays about cataclysmic events and are now living through one themselves (as we all are).

Marisol, the first play addressed in the article, was written by José Rivera, author of Gas, the Persian Gulf War-era play that we read in Chapter 11 of Imaginative Writing. The eight other playwrights and plays featured in the article are these:

The points I have included below are not ones that you’re required to address in your comments about the untitled monologue and The Story of Shabath. I offer them as suggestions only. I will address some of them in the follow-up remarks that I’ll post at the beginning of our next session.

The Story of Shabath

Post your two responses, twenty-five words or more each, as replies. If you address a point that one of your classmates has written in a previous reply, mention that classmate by name in your own reply. Post by midnight on Friday, April 17.

Remember to check your CVCC email and Blackboard regularly for updates and assignments.