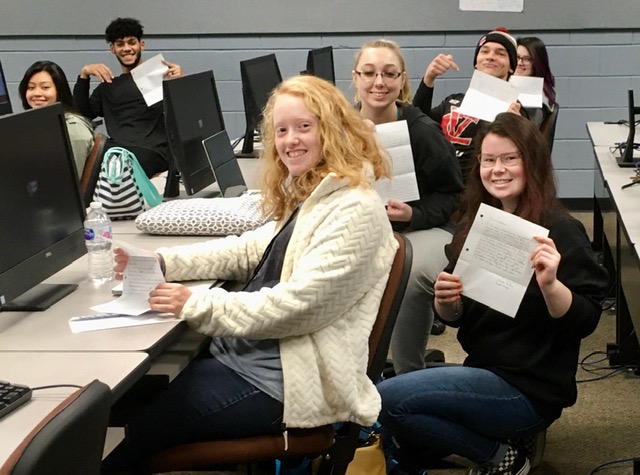 More than twenty years ago, in August of 1997, National Public Radio’s Morning Edition featured a story about Nancy Johnson, a second- and third-grade teacher who gave her students the assignment of writing letters to themselves, letters that covered such details as “their favorite toys, what makes them different from other kids and what they want to do in the future” (Morning par. 1). Johnson collected the letters and mailed them back to her pupils at the end of their senior year of high school. As I pictured Nancy Johnson’s eighteen-year-old students reading the words written by their seven- and eight-year-old selves, I began wondering how I might create a similar letter-writing experience for my college students. Following Johnson’s model wouldn’t be practical. My students’ addresses would change repeatedly throughout their twenties; I doubted that many of their letters would find their way back to them. Rather than requiring pieces of writing that might end up at the dead letter office, I crafted an alternate assignment. I required my students to write to themselves at the beginning of the semester, and I returned their letters to them on the last day of class.

Eventually I revised that assignment. Instead of requiring students to write letters to themselves, I required them to write snail mail. After I moved from Winston-Salem to Richmond, I shelved the letter-writing assignment for a while because of the increased emphasis on technology in the curriculum. But after a few years at Virginia Commonwealth University, I resurrected the assignment. I’d been meditating on how submitting assignments electronically—as students were and are with greater frequency—did not require the degree of preparedness that paper submissions demand. Around the time I began requiring both paper and digital copies of my students’ revised essays, I also began requiring them to submit mail-ready letters (addressed, stamped, and sealed) at the beginning of class once a month. Students’ initial reactions to the assignment have always been mixed. Many wonder why anyone would bother to put pen to paper when texting is far more efficient.

Whether students are resistant to snail mail or embrace its old-school charm, they are often surprised to discover how much the recipients appreciate their letters, which is another way of demonstrating how much their written words can matter. Back when I was completing my last semester of teaching at Salem College, one of my students told me that her mother wanted to thank me for requiring my students to write monthly letters. She had a record of her daughter’s first year of college that she wouldn’t have had if I hadn’t required her daughter and her classmates to write letters. Just as that mother was grateful for that written account of her daughter’s first months of college, many recipients of my students’ letters are undoubtedly grateful to find letters in their mailboxes, but over the years fewer and fewer of my students have received snail mail in return. Instead, they find a word of thanks in an email or a text message. 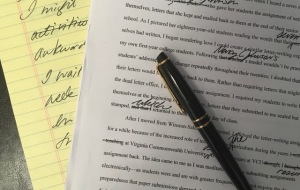 I was thinking about that last spring—how few of my students receive snail mail and how I wished more of them received replies—when it occurred to me that retirement communities offered potential pen pals—people who might not only welcome snail mail from college students but who might also write them back.  Margaret Shepherd, author of The Art of the Handwritten Note, recommends that if you don’t know whom to write snail mail to, “reach out to deserving strangers” (qtd. in Shain par. 22). With that in mind, I phoned the activities director at Abernethy Laurels, a nearby retirement community, and made a proposal: If my students wrote letters to potential pen pals there, would she provide the residents with an opportunity to write back? The activities director liked the idea but expressed concern about the residents’ privacy. What if the students addressed the letters to “Dear Reader” and I mailed them all in one large envelope? I asked. I suggested that she could send the replies the same way; the residents wouldn’t have to include their last names.

We ended our phone conversation with the promise to finalize our plans late in the summer. That’s when I would be able to tell her approximately how many students would be writing letters to her residents—or at least I thought I would. Instead, my teaching schedule changed twice in the days leading up to the beginning of the semester. Rather than teaching two sections of English 111, I would teach three, two of which were flex-start classes: ones that begin two weeks into the semester (and run for one hour and thirty-six minutes rather than one hour and twenty). One of the two flex-start sections would begin the Thursday before Labor Day; the other would start the following Wednesday.

Teaching two flex-start classes meant my students would compose their letters later in September than I’d planned, and the activities director would receive more letters than she anticipated.

When the students composed their letters in class, some asked when they would receive a reply. I could only tell them, I don’t know when you will, or if you will. After a month passed and I hadn’t heard from Abernethy Laurels, it occurred to me that the activities director may have been overwhelmed by the number of letters she received, forty-one in all. And what if the residents didn’t want to write back? Or what if some wanted to reply, but couldn’t? I imagined the activities director transcribing letter after letter for residents with arthritic hands. If I had given her a formidable task, I didn’t want her to feel compelled to complete it. If I phoned or emailed to request an update, I might put her in an awkward position. So I waited until the first week of November to email her. She replied that the residents had responded to thirty-five of the letters and would soon complete responses to the remaining six.

Less than a week later, I received an envelope containing forty-one letters, one for each of the students who had written to a potential pen pal at Abernethy Laurels. How can I describe the feeling of beginning class the next morning with mail call, of handing students pieces of writing that weren’t assignments annotated with my ink but words of introduction from people with whom they may correspond for years to come? As the students read their letters, their eyes lit up. Occasionally a student read a line out loud. That’s all I know of the contents of those letters. That’s all I need to know. I could read the gratitude in their faces. I didn’t need to read the words on the page to know that it’s an assignment worth repeating.

In Lee Smith’s tribute to Flannery O’Connor, she wrote of the transformation she experienced as a college student when she read O’Connor’s fiction for the first time. I thought of those words of Smith’s—and of the words of O’Connor’s that inspired them—when I received a gift from a woman who was a student of mine more than a decade ago. Last Saturday I was working at my desk when the mail carrier dropped the package on the porch. What I found inside was a picture of O’Connor in a gold-colored peacock frame, the bird wreathing O’Connor as her own pet peacocks had circled the writer on her farm, Andalusia, where she lived the last years of her short life.

Along with the framed picture, the student enclosed a note with these words: “I think of you often. Thanks for changing my entire academic life by introducing me to the amazing Southern women writers!”

Those writers included Smith, whose whole notion of the short story was upended when she read O’Connor for the first time. In Smith’s words:

[S]omehow I had got the idea that a short story should follow a kind of recipe, like a Lady Baltimore cake. Conflict, suspense, resolution; a clear theme; an ending that tied it all up in a neat little bow. Yet when I read that famous last line of  “A Good Man is Hard to Find,” I realized that nothing was wrapped up here—instead, a whole world opened out before my astonished eyes, a world as wild and scary as life, itself. (19)

A world opened before my eyes, too, when I first read O’Connor and Smith. And for me as a teacher, there is no greater honor than the opportunity to witness whole worlds open before my students’ eyes as they read those writers for the first time.

And Aine, what can I write of your expression of thanks? That it’s as exhilarating and astonishing as the words of those writers. Thank you!