When Stephanie Lindsay, who played Karla in the recent LR Playmakers’ production of Wonder of the World, first visited class on February 6, the students had not begun drafting their analyses of the play and opening night was more than a week away. Today when Lindsay returned for a follow-up visit, the students had submitted their revisions of their papers and many had also seen one of the performances of the show. After all of the students projected their analyses-turned-blog posts on the big screen and spoke briefly about the focus of their writing, Lindsay led them in a discussion that traced the journey of the play from page  to stage.

Along with her insightful remarks regarding the actors’ and the director’s roles in bringing the characters to life, Lindsay reflected on the vital opportunity that live theatre offers us in the digital age: the experience of sharing stories together face to face in real time in an increasingly fragmented culture. 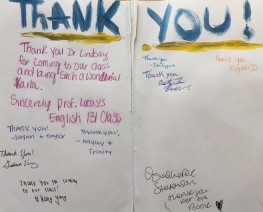 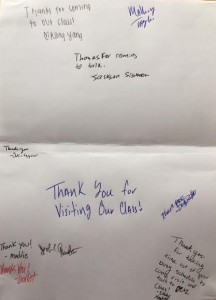 As Lindsay spoke, my thoughts turned to the readings that I selected for the course, ones that we can see performed on stage or that we can see addressed by the visiting writers who wrote them. In a course titled Critical Thinking and Writing, virtually any texts could serve as our subjects of inquiry. But studying plays produced at Lenoir-Rhyne and books written by the university’s visiting writers creates opportunities for face-to-face, real-time experiences that the study of other texts doesn’t allow.

Thank you, Stephanie Lindsay, for bringing Karla to life, both on the stage and in the classroom, and thank you for your observations on live theatre and stage craft. And thanks also to Kiyah and Mallory for producing cards to express our gratitude.

David Lindsay-Abaire’s farce Wonder of the World chronicles Cass Harris’ search for meaning as she embarks on a new life in Niagara after discovering that her husband of seven years, Kip, has harbored a secret sexual perversion. Once she reaches her destination, she finds that life away from Kip is no honeymoon either but a series of encounters with an assortment of eccentrics grappling with their own losses.

For Cass, the loss is one of innocence. No longer innocent of the knowledge of her husband’s bizarre fetish, she 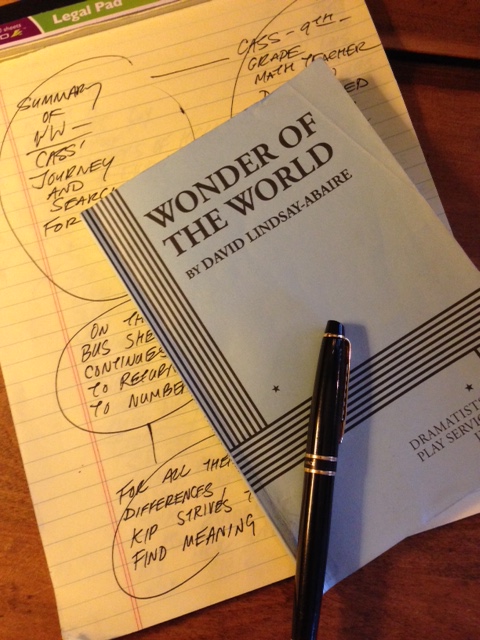 struggles to come to terms with it. Though Cass chooses to start a new life, she continues to see the world through the lens of the ninth-grade teaching job that she leaves behind (along with Kip), equating her mistake of marriage to a mathematical miscalculation. As she explains to Kip: “Look, I agreed to marry you based on what I knew to be true. Kip equals X. X will make me happy. Everything added up. Seven years later I find out that you’re not X at all, you’re Z. And if you’re Z, then I did the math wrong” (1.1). Ever the math teacher, Cass perceives the world as a series of signs with determinate meaning, a tendency that seems to compound the difficulty of her quest. On the bus to Niagara, where Cass adopts fellow traveler Lois Coleman as her sidekick, Cass continues to think in terms of numbers, measuring her old life as “463 road signs behind me” (1.2). Though she eventually loses track of the signs, she remains focused on her numbered to-do list, which includes becoming a contestant on The Newlywed Game, a show that turns couples’ compatibility into a numbers game.

Unlike Cass, her husband, Kip, does not seek meaning in numbers. When Karla and Glen (partners in marriage as well as private investigation), confide to Lois that Kip has hired them to track down Cass, Glen notes that Kip “[s]tarted to put two and two together” (1.7). For Kip, “started” is the operative term. He is not a numbers man. The proof that he offers of their undying love—including the ring they found, “the sign,” as Kip a calls it (2.1) —is insubstantial evidence in the eyes of Cass. Their sign systems aren’t the same; they speak different languages. For Kip, numbers games are “crass and divisive” (1.2).

When couples counselor Janie, clad in a clown suit, leads Cass and her cohort of misfits through a Newlywed-style

therapy session, Cass says that “[i]t’s not just a game! Things have meaning. Or at least they should” (2.3). Her emphasis on “should” indicates that she has embraced the concept that meaning may be indeterminate. But neither she nor the other characters can leave numbers behind, not altogether. After Captain Mike, Kip’s rival for Cass’ affection, accidentally shoots himself, rather than reflecting on his death, the characters attempt to quantify fears as they quibble over which is number one: being alone, public speaking, or needles (2.3).

Only Karla seems to yield to the idea that answers may elude us. As she observes to Lois: “I don’t even think about my marriage anymore. Why this, why that? I have no idea how it works, and that’s fine by me. It’s like Stonehenge, an unknowable mystery that the world has come to accept” (2.4).

The final scene on the river leaves the audience, along with Cass and Lois, in a holding pattern. What happens remains unclear. The ambiguity comes at a risk; it may try the patience of audience members who find the play’s farcical humor too ridiculous or contrived, or as New York Times reviewer Ben Brantley wrote “forced rather than organic.” For others, though, the grotesqueness of Cass’ Niagara Land may serve as an apt metaphor for our own absurd political terrain with its crass and divisive stream of fake news and alternative facts. Perhaps asking “[w]hen does the clarity come?” (2.4) and persisting in our quest for it will sustain us, like Cass and Lois, as we find ourselves over a barrel.