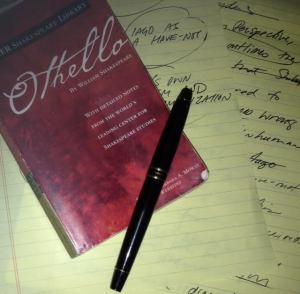 Susan Snyder’s “Othello: A Modern Perspective,” considers the various approaches Shakespeare scholars have offered to the question, what’s the source of the tragedy? Is it Iago, the inhuman embodiment of evil? Is it Iago, the human villain? Is it Othello, himself? Or is it the social forces of Venice? Though all of these approaches are valid—and as Snyder observes, “[n]either separately nor in conjunction can they offer anything like ‘the whole truth’” (288)—Iago’s actions as an all-too-human have-not, someone who feels left behind, is the answer that resonates in the minds of many of us now.

Our recent campaign season has spotlighted citizens who, like Iago, believe that they have been passed over, and we have witnessed repeatedly the discrepancy between appearance and reality that Iago masterfully exploits. In the first scene of the play, when Iago recounts Othello’s appointment of Cassio as his lieutenant, he observes that Cassio lacks his experience in the field, noting that “Mere prattle without practice / Is all his soldiership” (1.1.27-28) and “Preferment goes by letter and affection / And not by old gradation” (1.1.38-39).  For Iago, it’s another way of saying the system is rigged.

To set things right for himself, “honest” Iago manipulates not only the gullible Roderigo but everyone else, “show[ing] out a flag and sign of love / Which is indeed but sign” (1.1.173-74). As he betrays Roderigo, Cassio, and Othello, even as he publicly conveys the utmost devotion, he also offers the appearance of Desdemona’s handkerchief—first in the hands of Cassio and later in Bianca’s—as the “ocular proof” (3.3.412) of Desdemona’s infidelity.

That ocular proof stokes the jealous rage that leads Othello to murder Desdemona, an irrational act of violence that points to the Moor’s own tragic flaw and indirectly to prevailing social forces. We see Desdemona and Emilia fall victim not only to the husbands who murder them but also to their prescribed roles in Venetian society. Still, if not for Iago, Desdemona and Emilia would live, as would Othello and Roderigo. As Lodovico says to Iago, “This is thy work” (5.2.427).

Iago’s “work,” as Lodovico puts it, is an evil that continues to haunt us, not because it’s inhuman but because it’s all too real. We know the hatred engendered by the have-nots and the ease with which mere appearance can seem to be ocular proof—a problem that’s compounded for us in the digital age, both in politics and in our personal lives. Othello leaves us wondering who our own Iagos may be, not just the trolls wreaking havoc on Twitter for all to see, but also the BFFs—“I am your own forever” (3.4.546)—stroking our egos even as their private messages poison us.